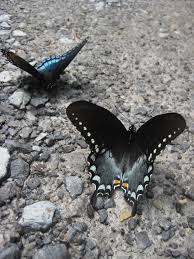 The bridge spanned across the shallow ravine. Above was the trickling of a stream over a precipice. The water splashes down in the sandy pool at the bridges foot. Two hikers had stopped in the center of the bridge. They were taking turns posing for pictures in front of the weedy falls.

“Move back a little more. I can’t see the waterfall behind you.”

The bridge shook slightly as the man backed up. The weathered handrail bowed back and the man leaned his head and shoulders over the bridge’s edge. Another gaggle of hikers walked over the hill and out from behind the bushes that hid the rest of the trail. They gathered at the edge of the bridge waiting their turn to take pictures at the falls.

The couple left them behind and walked further down the trail. The trail was covered by a crust that crunched lightly with every step, but the wind had a dusty smell as it blew. They came to a long flat stretch. The trees lined either side of a grassy meadow and the trail cut a beige scar across the middle. There was a group of about five butterflies sitting the middle of the trail. They fanned their two toned vibrant blue and velvety black wings. Another butterfly lit down onto a fresh pile of horse manure. It extended its proboscis into the dark brown round of excreta to suck the water from the steaming pile.

The woman pulled the camera out of her pack and began snapping pictures.

“Really, you are taking a picture of horse crap?”

“The butterfly is really pretty. People will just think it is sitting on top of a rock.”

Richard Braxton is a writer struggling with his inner poet. He has fought the poetic urge most of his life, but lately, he has fallen prey to this lifestyle. And the world is the worse for it. View all posts by The.Richard.Braxton

5 thoughts on “Sitting on top of a Rock”